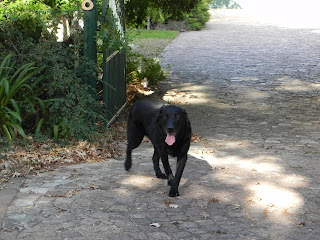 And here is Lost Ground: 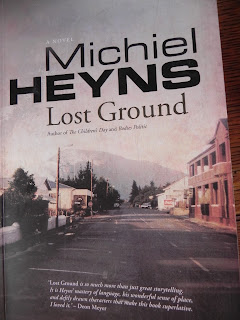 Liquorice is the aptly-named shiny black Labrador belonging to my neighbours. During my Year Without a Dog, I got into the habit of taking Liquorice for walks, a habit that, now that Simon has arrived, I am still observing. Liquorice is, like most Labradors, angelically mild and infallibly gentle. So that when I came to write my latest novel, Lost Ground (published last week by Jonathan Ball, now available at all good bookstores, or, failing that, at Kalahari.net -- and that was the commercial break), and needed a sympathetic, supportive canine presence, Liquorice came to mind, and I borrowed him for my novel. He is the only character in a novel of mine whose name I did not change to forestall a libel suit -- or no, there was Dumbo, in my first novel, about whom more in a later blog. Liquourice, it must be said, is not a plot mover; he is there, as I said, purely to provide sympathy and support. There are, however, two other dogs in the novel, and they do actually have a part to play in the plot. There is Cedric, the Maltese, who is The Dog That Did Not Bark in the Night; and then there is Kerneels, an amiable mongrel, whose role in the plot I can't divulge without spoiling the story. Oh, yes, and at one point there is a cameo appearance of 'an elderly gentleman with a doddery Dobermann.' That was my Hitchcock moment, written while my lamented Nicholas was still alive, though, yes, doddery.
It has occurred to me that, not surprisingly, all my novels feature at least one dog somewhere, some of them quite prominently. Future blogs will be dedicated to these sharers or my fictional space. Simon will be taking a back seat, I suppose, though I will usually manage to smuggle in a photo or two. Here, for instance, is Simon with Liquorice: 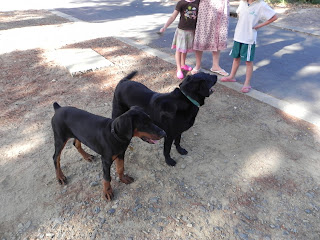 The little girls in the background, by the way, are about to have their tentacled balloon snatched. (See the previous blog.)
Posted by Michiel Heyns at 8:22 AM 6 comments:

... nor thy neighbour's tentacled balloon.

I know this is neither original nor profound, but what is about other people's toys that makes them so much more attractive than our own? The Lord in His Wisdom knew all about it, and tried (unsuccessfully, as it turned out) to put an end to it once and for all in the Tenth of the Ten Commandments: 'Thou shalt not covet thy neighbour's house, thou shalt not covet thy neighbour's wife, nor his manservant, nor his maidservant, nor his ox, nor his ass, nor any thing that is thy neighbour's.' (Incidentally, what a fascinating hierarchy of desire, starting with the neighbour's house and ending with his ass).
Simon has been provided with a veritable cornucopia of toys: 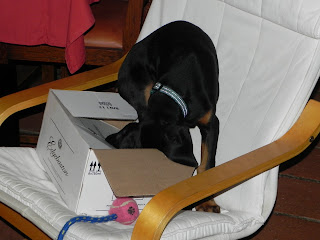 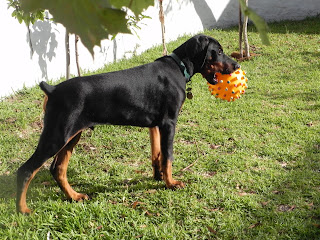 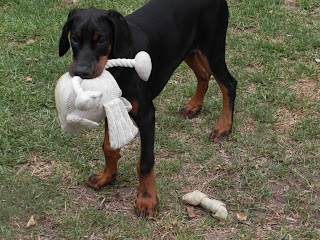 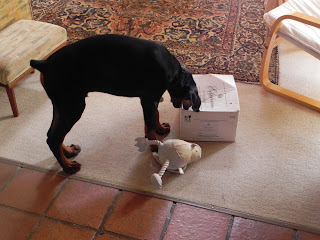 (The cornucopia is in fact an Edgebaston wine box.)
You'd think Simon would be satisfied. But what happens? The neighbour comes to visit (well, neighbours, but I'm sure the Lord had a kind of collective neighbour in mind): 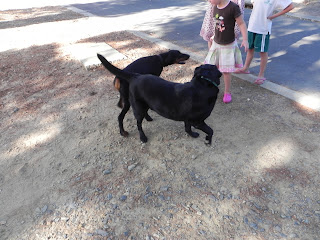 ( The neighbour's dog, by the way, is a black Labrador called Liquorice, who will soon figure in this blog.) The neighbour's little daughter has recently acquired a new toy, which I can only describe as a balloon with tentacles, one of those ingenious inventions made possible by technological advance attendant upon the Space Race. Simon, whose attention is normally exclusively focused on poor long-suffering Liquorice, sees the tentacled balloon, and immediately covets it. For a Dobermann, as for King David of old (I'm thinking of Bathsheba, I think) to covet is to grab: 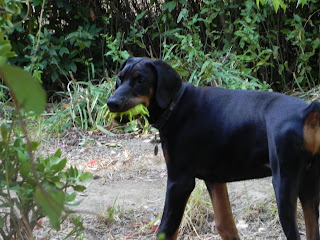 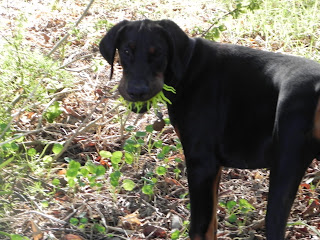 So Simon ends up looking like one of the Things from Where the Wild Things Are, and a little girl ends up in tears -- as, mutatis mutandis, the Lord warned would happen, although I think He intended for the covetor rather than the covetee to be smited (ungrammatical, but smitten sounds inappropriate).
BUT enter Space Age Technology: the tentacled balloon miraculously survives twenty minutes in the Jaws of Hell, and after a merry chase, is restored, gob-covered but otherwise unharmed, to its rightful owner.
Moral: what's a bit of coveting between neighbours?

Posted by Michiel Heyns at 10:55 AM No comments: