Another literary quiz: in which novel does Skulker feature? (You'll gather that he's a dog.)

Okay, here are Skulker's five minutes of fame. The speaker is telling how he and a friend peered through a window and saw two howling children inside:


... and in the middle of the table sat a little dog, shaking its paw and yelping, which, from their mutual accusations, we understood they had nearly pulled in two between them. The idiots! That was their pleasure! to quarrel who should hold a heap of warm hair, and each begin to cry because both, after struggling to get it, refused to take it. We laughed outright at the petted things, we did despise them!

No, the heap of warm hair is not yet Skulker. But the laughter of the two outsiders looking in alerts the children inside, who start screaming for their mamma  and papa, and soon the family bulldog is let loose upon them, and grabs one of the intruders by the ankle:


'The devil had seized her ankle, Nelly; I heard his abominable snorting. She did not yell out -- no! She would have scorned to do it, if she had been spitted on the horns of a mad cow. I did, though: I vociferated curses enough to annihilate any fiend in Christendom, and I got a stone and thrust it between his jaws, and tried with all my might to cram it down his throat. A beast of a servant came up with a lantern, at last, shouting --
"Keep fast. Skulker, keep fast!"
He changed his note, however, when he saw Skulker's game. The dog was throttled off, his huge, purple tongue hanging half a foot out of his mouth, and his pendant lips  streaming with bloody slaver.'

Yes, the speaker is, of course, the young Heathcliff looking in, with Catherine Earnshaw, on the young Lintons. And the Lintons keep dogs as pets and as protectors of their property, Thrushcross Grange. The interesting thing here is that although the   trespassers are seen as a threat, all the violence is inside the house: the children tearing their dog apart, the 'beast' of a servant, the slavering dog. And on discovering that Skulker's prey is a little girl, accompanied by a boy, Mr Linton, who is a magistrate, says: 'Don't be afraid, it is but a boy -- yet the villain scowls so plainly in his face, would it not be a kindness to the country to hang him at once, before he shows his nature in acts, as well as features?'
So Skulker, the law and the gallows are there to ensure that the Grange remains inviolate. In the event, Heathcliff is not hanged, and he duly goes on to show his nature in acts, as well as features. In order to gain power over the Lintons, he woos Isabella, she of  the heap of warm fur, and elopes with her. As he gloatingly describes it:


She cannot accuse me of showing a bit of deceitful softness. The first thing she saw me do, on coming out of the Grange, was to hang up her little dog [...] But no brutality disgusted her -- I suppose she has an innate admiration of it, if only her precious person were secure from injury!

So the little dog, rather than Heathcliff, gets hanged. One of the things that make Wuthering Heights such an unusual novel is that we can't really take sides here: yes, Heathcliff is clearly a monster, but is that worse than the pallid complicity of the infatuated Isabella? Is hanging the little dog worse than pulling it apart in a contest?  (Ideally, of course, one would do neither, but Emily Bronte does not do the middle ground).
But, although  Heathcliif may hang dogs, he prefers them to humans. When he has at last taken possession of Wuthering Heights, the place is overrun with them, and when the hapless Lockwood pays his courtesy call, he finds a pointer bitch with a litter of puppies in the kitchen:


I took a seat at the end of the hearthstone opposite that towards which my landlord advanced, and filled up an interval by attempting to caress the canine mother, who had left her nursery, and was sneaking wolfishly to the back of my legs, her lip curled up, and her white teeth watering for a snatch.
My caress provoked a long, guttural gnarl.
'You'd better let the dog alone,' growled Mr Heathcliff, in unison, checking fiercer demonstrations with a punch of the foot. 'She's not accustomed to be spoiled -- not kept for a pet.'


The child is father to the man. But once again, where are our sympathies really here? Not, I think, with the effete Lockwood, who has just in the previous paragraph told us how he humiliated a young woman by making eyes at her and then, when she responded, 'shrunk icily into [him]self, like a snail.'
Wolf or snail? Pet or predator?
Here is Simon at my hearthstone, attacking one of my guests. Note how the timid advances of the guest unleash the slavering beast beneath the skin: 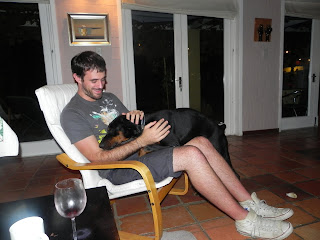 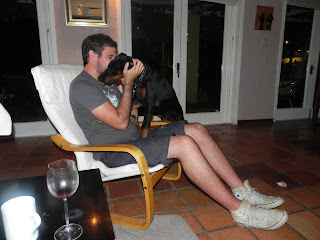 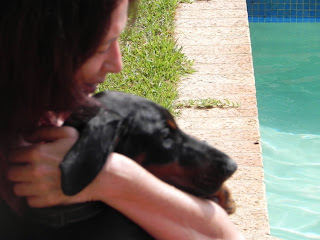 Posted by Michiel Heyns at 4:53 AM No comments: