I was told recently, as a compliment, that Simon has 'good ball drive'. This, it seems, is not to be confused with ball sense (which I have always regretted not having more of: it seems to yield such disproportionate rewards to its possessors): it is not really a skill at all, just a maniacal determination to chase any ball in sight or smell. This is what it looks like in action: 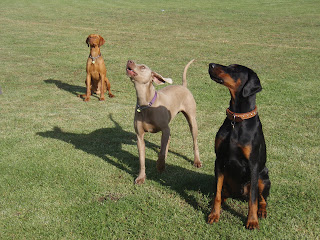 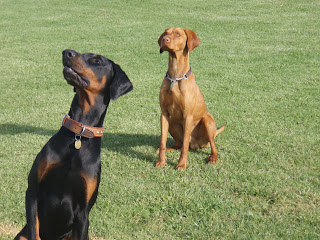 The other two ball-driven dogs, by the way, are Balu the Vislu and Dusty the Weimaraner, park acquaintances of Simon's, and they're all waiting for Andy, Balu and Dusty's owner, to let fly with the ball. As he duly did: 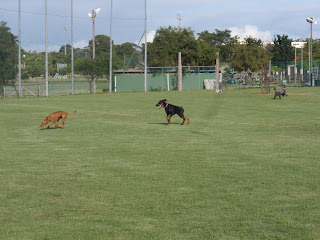 The ball is in there somewhere (remember those spot-the-ball competitions in newspapers?), but Simon is not really chasing the ball as much as the other dog. So perhaps he isn't really ball-driven?
Perhaps. But then there is the Yellow Ball, which in fact made its first appearance on this blog some time ago, as one of the items in Simon's cornucopia of toys. It is, alas, one of the few surviving  items, the others having been systematically chewed to pieces; but even it has not escaped intact. The original concept  behind the Yellow Ball (who thinks up dog toys anyway?) was thoughtful: the ball had a little adjustable hatch through which one could fill the ball with pellets or other treats; by regulating the aperture one could then control the release of pebbles; the dog, the theory ran, would discover that by rolling the ball he could release pebbles, and would thus remain happily occupied for hours while you got on with writing your novel or baking your cake. In practice, the dog, or Simon in this instance, got impatient with the gradual-release principle and chewed off the little hatch, thus releasing all the pebbles at once and rendering the ball useless for its intended purpose. But this was just the start of the fun for Simon. The gaping hole where the hatch used to be now provides him with a handy grip on the otherwise somewhat rebarbative ball: 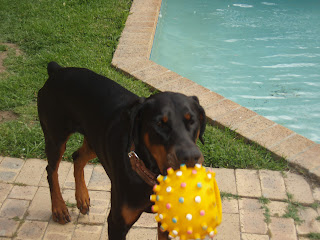 Actually, it would seem from this picture that Simon no longer needs the gaping hole (the flat bit on the right), and has mastered the art of gripping the ball by the spikes. This may all be part of Ball Drive. But the really charming thing about the yellow ball, as far as Simon is concerned, is that he can ram it into my back while I'm crouching at my computer, the handy spikes driven into my flesh then serving to goad me into throwing the ball  as far away as I can -- at times, in desperation, into the pool. The point about Ball Drive is that it is not a Directionless Drive; it must drive something or someone somewhere, if only to distraction. It's an overrated accomplishment, I'd say, but then, I don't have it; I'm just the one driven.
As far as I know, there isn't much in literature about Ball Drive (although I haven't read Victor Matfield's recently-appeared memoir; it may be all about Ball Drive). Well, there is, of course, John Berryman's

What is the boy now, who has lost his ball,
What, what is he to do? I saw it go
Merrily bouncing, down the street, and then
Merrily over--there it is in the water!
No use to say 'O there are other balls':
An ultimate shaking grief fixes the boy
As he stands rigid, trembling, staring down
All his young days into the harbour where
His ball went. I would not intrude on him,
A dime, another ball, is worthless. Now
He senses first responsibility
In a world of possessions. People will take balls,
Balls will be lost always, little boy,
And no one buys a ball back. Money is external.
He is learning, well behind his desperate eyes,
The epistemology of loss, how to stand up
Knowing what every man must one day know
And most know many days, how to stand up
And gradually light returns to the street
A whistle blows, the ball is out of sight,
Soon part of me will explore the deep and dark
Floor of the harbour . . I am everywhere,
I suffer and move, my mind and my heart move
With all that move me, under the water
Or whistling, I am not a little boy.

I would not want to trivialise the poem by finding parallels between the grief-shaken boy and Simon, but 'as he stands, rigid, trembling' certainly admirably describes Simon's waiting for  the throw of the ball -- not, though, the 'epistemology of loss'  as much as the anticipation of -- what? What is it that drives ball drive? What does Simon expect at the end of the chase?
So, unexpectedly, we end up in the realm of philosophy again. Because who is it that Simon reminds us of in his tireless chasing after a ball that is repeatedly flung out of his reach for him to pursue all over again? Why, Sisyphus of course, rolling his rock uphill eternally, only to have it roll back down again.  And now we see what Camus meant, in The Myth of Sisyphus, when he said 'We must imagine Sisyphus happy': Sisyphus had ball drive.
Posted by Michiel Heyns at 4:03 AM No comments: