Why bankers don't have dogs.

I wouldn't say this to just anybody, but given the likely readership of this blog, I feel safe in confessing that my way of keeping my interest sharp and perceptions clear in an art gallery is to count the dogs. Once you've noticed one dog, you're amazed to discover how many there are, and in what disparate genres of painting, from the earliest religious paintings through to cubism (no dogs in abstract expressionism, but not much else either). Of course, all that this demonstrates (or, more precisely, illustrates), is that the mutual reliance of dog and human is not a recent fad (though some breeds of dogs, of course, are distinctly faddish): it is a simple feature of everyday life through the ages. This, then, would also be why so many books contain dogs: books, especially realist novels, are taken to reflect life, and dogs have become a part of human life.
This being so, it's interesting to come across a book that, though entirely realist in every other way, has (almost) no dogs in it: 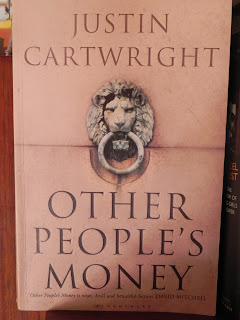 I might in fact not have noticed the absence of dogs (it's not altogether my sole literary criterion), had the author not drawn our attention to. At one point in the novel, Julian and Nigel, two bankers up to no good (the whole novel is a pretty devastating indictment of bankers and all their works), are sitting in Julian's garden plotting their way out of a tight spot that they've landed in entirely through their own malfeasance:


Two people are out exercising their dogs. As they pass Julian and Nigel, sitting wrapped against the early chill at a table under the mulberry tree -- just coming into leaf -- they wave cheerily. Dog people, Julian thinks, have an idealised vision of a world in which everybody is matey and loves animals and likes a chat.

Dog people, the implication is, are a bit simple-minded, really -- exactly the sort of people that would entrust their money to the  likes of Julian and Nigel, and be left the poorer and possibly the wiser for it. Bankers like Julian and Nigel, on the other hand, are too savvy to trust anybody: their only relation with trust is to exploit it. And what creature more trusting than a dog? But the problem, from the banker's point of view, is that a dog's trust is totally unexploitable: dumb creatures that they are, they have no money to invest. So what's the point, really, of a dog? Except,of course, in keeping dog people's idealised vision of the world intact for long enough for Julian and Nigel to cash in on it. Other people's dogs may yet lead to other people's money.

In that  other world, then, where everybody is matey (in fact, in the park, where dog people go to be matey and have a chat) Simon met Charlie, the Golden retriever. They got on so well that Charlie's owner brought him over to visit Simon at home. The visit was a great success: 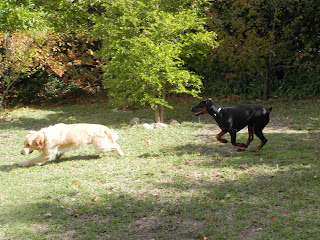 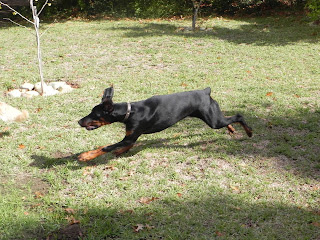 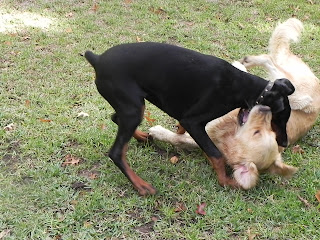 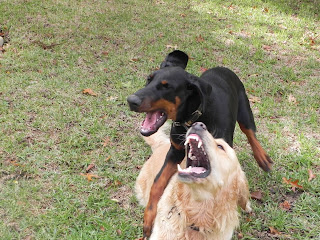 Yes, I know it looks like nature red in tooth and claw rather than a play date, but in fact no blood was drawn. It was a fair fight -- until Charlie discovered the remains of Simon's chew bone and appropriated it: 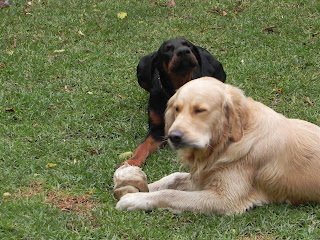 Possession, Charlie seems to be saying, is nine-tenths of the law. As for Simon: 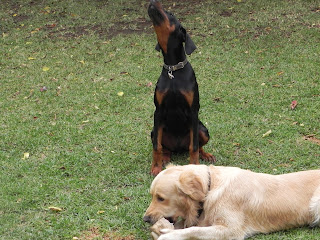 Moral: Thou shalt not entrust thy money nor thy bone to a plausible stranger.
Posted by Michiel Heyns at 3:20 AM