Philosopher's can't seem to let go of the question whether or not dogs can think. I have had occasion on this blog to refer to Philosopher or Dog? and The Philospher's Dog, both books in their different ways dealing with this central problem. But there are plenty of other such books out there. So, in 2004 there was How Dogs Think: Understanding the Canine Mind by Stanley Coren, and in 2005 If Dogs Could Talk: Exploring the Canine Mind by Raymon Coppinger.  I have not read either of these books, but they were lucidly reviewed  by Bruce Blumberg and Raymond Coppinger in Natural History of February 2005, under a title that  pretty much pre-empts the review itself: 'Can dogs think? Maybe yes, and maybe no. What dogs do quite well, though, is make people think that dogs can think.' Talk of covering your bets.  So if I think that my dog can think, that is because I've been conned by my dog into thinking that dogs can think. But doesn't that require the dog to think at quite an advanced level of cerebration? I mean, duplicity is one step up from mere thinking, no?  Blumberg and Coppinger warn against this kind of thinking:

If dogs could write books, a good topic would be the following brain-twister: "How should dogs behave in order to get people to think that dogs are thinking like people do, so that people will behave as dogs want them to?" But even to imagine this possibility is to fall, however briefly, into the anthropomorphic trap that lies in wait for all who study dogs.

Anthropomorphism, of course, is the cardinal sin in thinking about animals: in appropriating them to human patterns of thought, it denies them their animalness. And yet, of course, human patterns of thought are all we have in trying to understand animals.  So round and round we go.
If I can be crashingly obvious, surely the answer to the question Can Dogs Think? is It Depends on what you Mean by Thinking. And what  so exercises the philosophers is not a deep interest in dogs but an advanced and often abstruse interest in the nature of thought. For the purposes of most dog owners, it suffices to accept that dogs can think about things that concern them: not the origin of the universe, but the source of their dog biscuit; not the meaning of life, but the meaning of 'walkies!' And they can link cause and effect, if they are interested enough in the effect.
Simon, for instance, has thought long and hard about his throw toy, and how to get most mileage out of it. 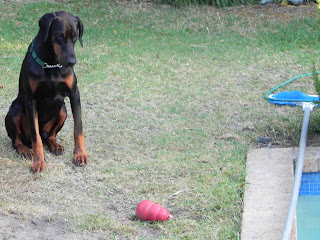 His quandary, if I may so anthropomorphise that expression on his face, is how to get me once again to throw the toy for him to retrieve. His mental processes are quite up to making the connection between the toy and me: 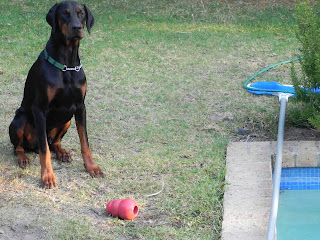 He then makes a further connection: the pool: 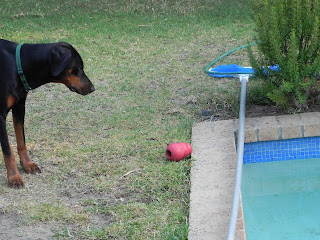 He also knows that I retrieve objects that fall into the pool. So, by a further association of ideas: 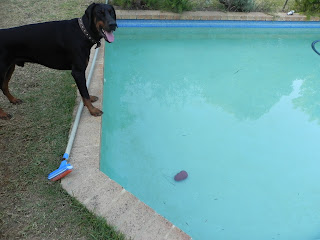 So guess who gets to retrieve the toy.

Poets, unlike philosophers, have never really had the problem of ascribing cerebration to dogs. Used to finding likeness in unlikeness, they anthropomorphise beautifully. Here is Billy Collins's 'Two Creatures' (thank you, Lou-Marie, for sending it to me):


The last time I looked, the dog was lying
on the freshly cut grass
but now she has moved under the picnic table.

I wonder what causes her to shift
from one place to another,
to get up for no apparent reason from her spot

by the stove, scratch one ear,
then relocate, slumping down
on the other side of the room by the big window,

or I will see her hop onto the couch to nap
then later find her down
on the Turkish carpet, her nose in the fringe.

The moon rolls across the night sky
and stops to peer down on the earth,
and the dog rolls through these rooms

and onto the lawn, pausing here and there
to sleep or to stare up at me, head in her paws,
to consider the scentless pen in my hand

or the open book on my lap.
And because her eyes always follow me,
she must wonder, too, why

I shift from place to place,
from the couch to the sink
or the pencil sharpener on the wall –

two creatures bound by the wonderment
though unlike her, I have never once worried
after letting her out the back door

that she would take off in the car
and leave me to die
behind the solid locked doors of this house.

So Collins's  'I wonder' moves naturally  to the speculation 'she must wonder, too'.  Cogito ergo cogitat: I think therefore she thinks. I can see the logical problems here, but I can't see any other basis for such a close relationship:  'two creatures bound by the wonderment'.  The distance of incomprehension between us is what binds us: I can live with that.

All today I lie in the bottom of the wardrobe
feeling low but sometimes getting up
to moodily lumber across rooms
and lap from the toilet bowl, it is so sultry
and then I hear the noise of firecrackers again
all New York is jaggedy with firecrackers today
and I go back to the wardrobe gloomy
trying to void my mind of them.
I am confused, I feel loose and unfitted.

At last deep in the stairwell I hear a tread,
it is him, my leader, my love.
I run to the door and listen to his approach.
Now I can smell him, what a good man he is,
I love it when he has the sweat of work on him,
as he enters I yodel with happiness,
I throw my body up against his,
I try to lick his lips,
I care about him more than anything.

After we eat we go for a walk to the piers.
I leap into the standing warmth, I plunge into
the combination of old and new smells.
Here on a garbage can at the bottom, so interesting,
what sister or brother I wonder left this message I sniff.
I too piss there, and go on.
Here a hydrant there a pole
here's a smell I left yesterday, well that's disappointing
but I piss there anyway, and go on.

I investigate so much that in the end
it is for form's sake only, only a drop comes out.

I investigate tar and rotten sandwiches, everything, and go on.

And here a dried old turd, so interesting
so old, so dry, yet so subtle and mellow.
I can place it finely, I really appreciate it,
a gold distant smell like packed autumn leaves in winter
reminding me how what is rich and fierce when excreted
becomes weathered and mild
but always interesting
and reminding me of what I have to do.

My leader looks on and expresses his approval.

I sniff it well and later I sniff the air well
a wind is meeting us after the close July day
rain is getting near too but first the wind.
Joy, joy,
being outside with you, active, investigating it all,
with bowels emptied, feeling your approval
and then running on, the big fleet Yoko,
my body in its excellent black coat never lets me down,
returning to you (as I always will, you know that)
and now
filling myself out with myself, no longer confused,
my panting pushing apart my black lips, but unmoving,
I stand with you braced against the wind.

Yes, of course, the worst kind of anthropomorphism, that ascribes not only thought to the dog, but a kind of slave-like adoration. But then, who, in the end, really belongs to whom? Ask Simon.

Posted by Michiel Heyns at 1:22 AM