Isn't it where there are cows?

A regular feature, or sometimes background aspect, of this blog has been The Park. This is where Simon was first taken to socialise with other dogs and with human beings of all types and temperaments, and where he met his friend Charlie (see an earlier blog, 'He came to stay'). This is also where he could chase balls and generally run free, along with hundreds of other dogs similarly unfettered. He's been going there every day, often twice a day, for more than two years. There was an occasional squabble, and sometimes, usually on a Sunday, a once-a-week visitor who objected to dogs running free, and tried to remonstrate with the off-leash owners, of course without making any impression whatsoever. But in general the atmosphere was easy-going, sociable, tolerant. 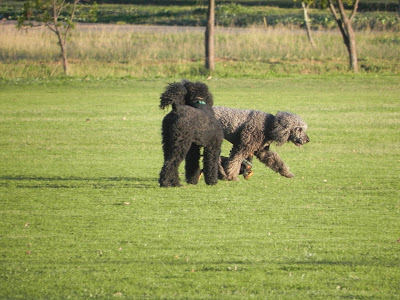 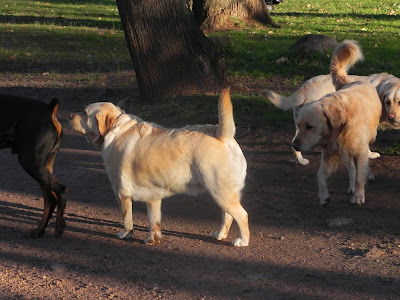 That is Simon's backside that is being sniffed by a passerby, and that is Charlie, approaching to sniff the passer-by's backside.

And one of the joys of the park, from a dog's point of view, is that there's a river -- more negotiable for a retriever like Charlie than a Dobermann like Simon: 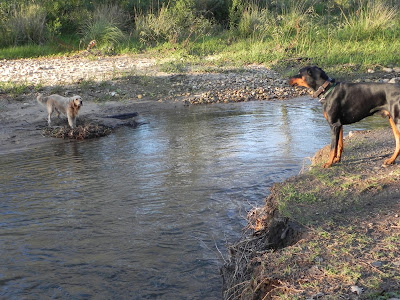 Now, possibly at the behest of the Sunday killjoys, the municipality has erected a spanking new sign spelling out, or depicting, the do's and (mainly) don'ts of using the park. 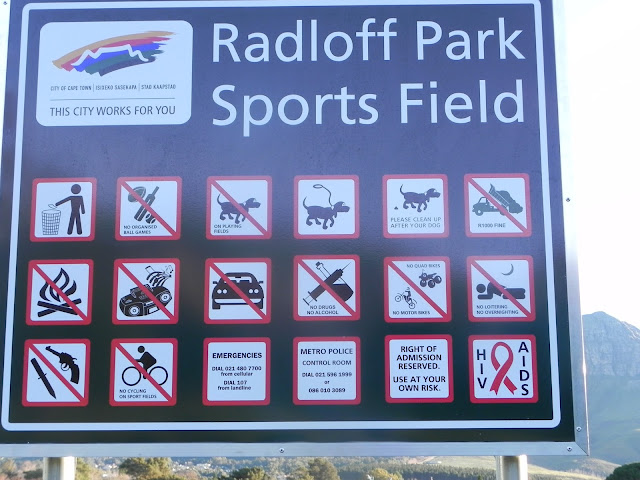 Most of the regulations are sensible, in that their transgression clearly constitutes a nuisance or danger to other users (although the ban on organised ball games on a sports field seems inexplicable). But that dejected-looking dog on a leash? Do the authorities really expect the couple of hundred dogs that visit the park daily to be trundled along on leashes? WHY?

Now I accept that there are reasons to leash dogs: for their own protection in traffic, for the protection of others if the dog has an uncertain temperament. Simon, after all, is walked all the way to the park on a leash, as witness his array of collars: 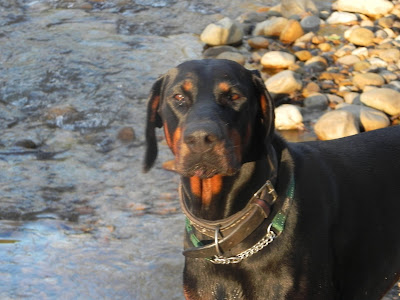 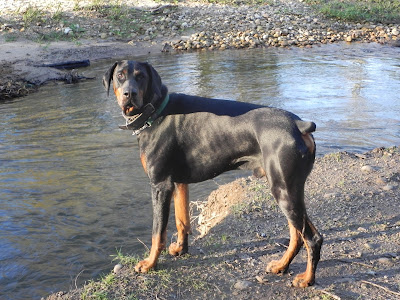 So there may be a reason for a leash under certain circumstances -- which does not, however, constitute an imperative for a leash under all circumstances. In fuming about this trite enough point, I found myself recalling Robert Frost's famous poem. 'Mending Wall'. It's too long to quote here in toto, and, as I say, it's pretty well-known anyway, but here's the most relevant bit.The speaker is trying to get his neighbour to see the pointlessness of the wall they exhaust themselves in mending every year.  For 'wall' read 'leash' or any other restriction:

There where it is we do not need the wall:
He is all pine and I am apple orchard.
My apple trees will never get across
And eat the cones under his pines, I tell him.
He only says, 'Good fences make good neighbours.'
Spring is the mischief in me, and I wonder
If I could put a notion in his head:
'Why do they make good neighbours? Isn't it
Where there are cows? But here there are no cows.
Before I built a wall I'd ask to know
What I was walling in or walling out,
And to whom I was like to give offence.'

But here there are no cows: that sums up the park, as far as I'm concerned. And I'm happy to report that the good citizens of Somerset West have proved as indifferent to  official decree as the stray dogs of Istanbul (see previous blog).

But since I'm on a Frost outing here, and on the subject of freedom and confinement, here's his wonderful sonnet 'The Silken Tent', which explores and indeed exemplifies the equilibrium-in-tension between freedom and constraint:


She is as in a field a silken tent
At midday when a sunny summer breeze
Has dried the dew and all its ropes relent,
So that in guys in gently sways at ease,
And its supporting central cedar pole,
That is its pinnacle to heavenward
And signifies the sureness of the soul,
Seems to owe naught to any single cord,
But strictly held by none, is loosely bound
By countless silken ties of love and thought
To everything on earth the compass round,
And only by one's going slightly taut
In the capriciousness of summer air
Is of the slightest bondage made aware.

Without the bondage, of course, the tent would collapse: the ropes are what enable the tent gently to sway at ease. 'Strictly held by none' and yet 'loosely bound' : that's why Simon has a collar, with a leash to attach to it where there are cows (or cars). Admittedly, it's pushing things to think of his leash as a 'silken tie of love and thought'; and 'going slightly taut' is a severe under-description of what happens to the leash when Simon's 'capriciousness' takes charge -- but hey, who said a dog was a silken  tent  anyway?

Posted by Michiel Heyns at 6:18 AM