We All Lose Our Charms in the End

A good friend, a mature and sensible woman, writes to me that she is 'aghast' to see that Simon has lost his puppy cuteness and has become a long-legged teenager. 'Stop feeding him!' she entreats. 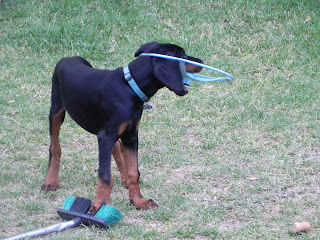 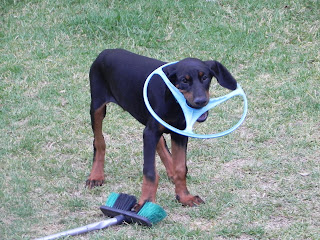 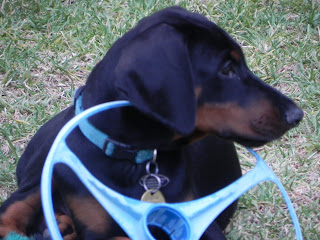 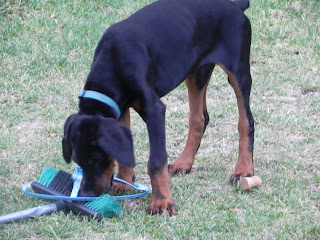 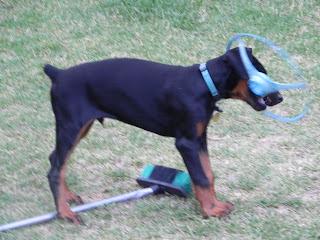 Well, yes, I can see that those legs have rather got ahead of the rest of the body. And already, when Simon goes to the park, he's getting fewer cuddles and coos. It would seem, according to Hal Herzog's invaluable Some We Love, Some We Hate, Some We Eat, that this is normal -- sad, but normal. Someone with more research grants than they could sensibly spend did a test:


University of California  at Santa Barbara researchers were interested in changes in the attractiveness of a golden retriever puppy named Goldie as she matured. Over a five-month period, they took Goldie to a highly traveled spot on campus where she would sit for an hour with her 'owner' (actually an assistant in the study), while the researchers tallied the number of passersby who came over to pet or play with her. Goldie's ability to seduce strangers decreased precipitously  as she transitioned from puppy to adult. Her drop in popularity was especially steep among women. When Goldie was at her cutest, women were twice as likely as men to chat her up. But by the end of the study, the number of women who stopped to stroke her head and say hi had dropped 95%, and the sex difference had completely disappeared.

Alas, poor Goldie. And alas anybody (over, say twenty-four) who makes a habit of seducing strangers. Of course, the study only proved what we know, which is  that, well, in the words of the song, we all lose our charms in the end. Also, in the words of another song, la donna e mobile.
There's a poem by Robert Frost that is (tangentially) related to the topic. It's called

The Span of Life

The old dog barks backward without getting up.
I can remember when he was a pup.

Of course, as always with Frost, it's the human perspective that interests him: the poem is not really about the dog's span of life, but about the speaker's -- or rather, it's about the interaction between the two spans. I can remember what the dog can't because I have a longer span -- but that doesn't mean that my span is unlimited. There's a theory that all sorrow is in effect a mourning for our own death, that we find tragedies sad because we see in them an image of all mortality, which is to say our own. It's beautifully expressed by G.M Hopkins in his poem

Spring and Fall
(To a young child)

Margaret, are you grieving
Over Goldengrove unleaving?
Leaves, like the things of man, you
With your fresh thoughts care for, can you?
Ah! As the heart grows older
It will come to such sights colder
By and by, nor spare a sigh,
Though worlds of wanwood leafmeal lie;
And yet you will weep and know why.
Now no matter child, the name:
Sorrow's springs are the same.
Nor mouth had no nor mind expressed
What heart heard of, ghost guessed:
It is the blight man was born for,
It is Margaret you mourn for.

Well, poor Margaret, having that lot dumped on her.  And poor readers of this blog, ending up with the gloomy topics again. The photographs will  have to make up for the verbal content. Here's Simon with Thomas (his junior by all of five days), a Belgian Shepherd who came to call. It's what Sylvia Plath called, admittedly thinking of a human baby, 'A common-sense/ Thumbs-down on the dodo's mode' ( a thumbs-down this blog is sorely in need of): 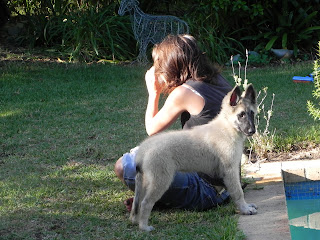 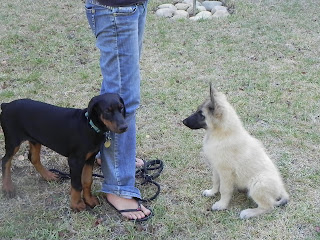 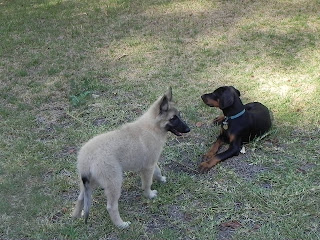 And no, you needn't remind me of what happened to Sylvia Plath.

Posted by Michiel Heyns at 2:39 AM