The Importance of Being Cute

My title is taken from a chapter heading in Hal Herzog's book, Some We Love, Some We Hate, Some We Eat. He argues, not surprisingly, that cuteness has real survival value for animals -- the difference between loving them and hating them or eating them may just be a matter of appearance. The Canadian government, according to Hertzog, in 1987 succumbed ('sort of') to public protests over the culling of baby seals: they banned the killing of seal pups under fourteen days old -- fourteen days being when the pups cease being so cute as to make bad copy on a poster. (This does, though, make me wonder: how come people eat sucking pig?)
Herzog argues, following Konrad Lorenz, that the 'cute response'  is triggered by the fact that humans are attracted to anything that looks like a human baby, and that 'young animals share features with human infants: large foreheads and craniums, big eyes, bulging cheeks and soft contours.' 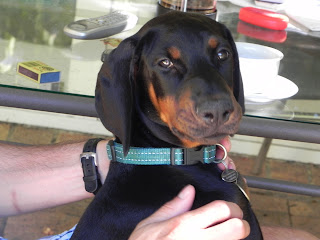 Bulging cheeks? Large cranium?  I don't see it. (Need I spell it out that in my book the puppy is cuter than the baby?) I wonder if one could do a test: take a puppy to the park, as I've been doing every morning. Count the number of people who approach the puppy, stroke it, play with it, ask a question about it. I'd say it runs to about 90% of everybody in the park. Now take a baby to the park. This I haven't done (nobody wants to lend me their baby) , but I'm willing to wager that the cute response will be way down at 50% max. But I'm open to persuasion: anybody out there with a baby?  (Okay, my sample is pre-selected. The park is frequented by dog-lovers. Okay, then, take the baby to the mall.)

Here are my friends Hans and Andre interacting with Simon: 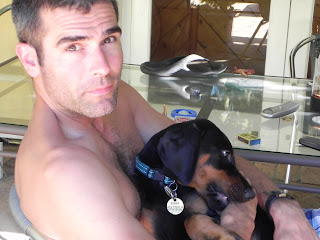 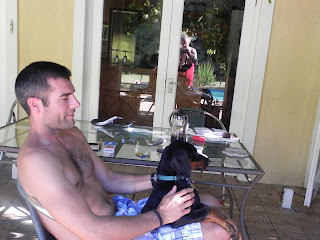 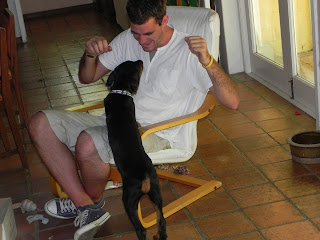 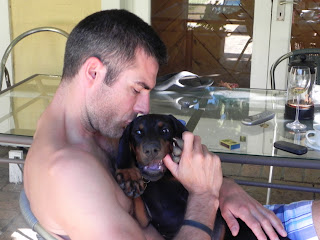 Now my question is this: are my friends responding to Simon's baby-like features? Or what? (The test would be to confront them with a live baby next time and see how they respond.)
Then there's another question: granted that cuteness has undoubted survival value, in that humans are attracted to animals in proportion to their cuteness --as Herzog says, 'This is bad news for the rare giant Chinese Salamander. It is the largest and possibly most repulsive amphibian on earth, a beady-eyed, six-foot-long mass of brown slime.' But then again, in China this may be the only way to escape being eaten --  granted, as I say, that we love animals because they're cute, what is that makes animals love us? Why would Simon give the time of day to two fully-grown unshaven human males?
It's a mystery.
Posted by Michiel Heyns at 4:33 AM