The invitation, as I mentioned in my last blog, said 'Dogs welcome.' The occasion was a J.M. Coetzee Festival in Richmond in the Great Karoo. Suppressing a slight scepticism as to the potential festiveness of an occasion dedicated to J.M. Coetzee, I accepted the invitation, packed my case and all Simon's paraphernalia (which took up most of the space in the car), and collected my friend Andre, who had kindly agreed to come along to help manage Simon. Not that Simon required much managing, at least at first. He lay in the back of the car very contentedly for the  duration of the seven hours plus that the trip took, with occasional pit stops. So everything was fine -- until we got to the guest house. The landlady had been warned of Simon's imminent arrival, and seemed grimly reconciled to his presence. Simon, however, took some persuading to get into the room; it is possible that it was the particular shade of pink that the room was draped in that scared him (I don't as a rule have much pink about at home), or perhaps the plethora of artificial flowers; either way, he balked, and had to be more or less dragged into the room. Once there, he made his dissatisfaction very clear: 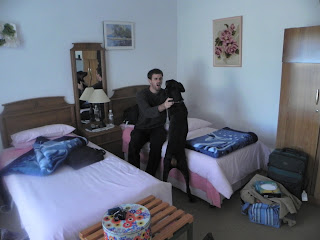 (The tin, by the way, contained Simon's food). Despite Andre's valiant efforts to subdue Simon, we decided that, in the light of his destructive abilities as demonstrated in the previous blog, we should lock all pillows in the cupboard and all blankets in the bathroom. Even then, we felt that that it was unsafe to leave him unattended in this particular room, so he went with us for lunch at Die Vet Muis -- a restaurant I can recommend to anyone stopping over in Richmond, by the way: avoid the Wimpy on the N1, take the turnoff into Richmond itself, and there you'll find Die Vet Muis, serving excellent venison pie with pumpkin fritters for R55. Another plus from our point of view, was that they had tables on the stoep, so there was no problem with the fact that we had a largish Dobermann with us.
I had naively assumed that we'd be able to leave Simon in the room while we attended the Coetzee sessions, but for reasons sketched above we decided against this. So for the first afternoon, I attended the sessions, while Andre baby-sat Simon. It was clear, though, that this would not really be practicable for the all-day sessions on Saturday  -- even if Simon could tolerate being cooped up in a guest house bedroom for a whole day, Andre couldn't.  So we decided that Simon would go along to Disgraceland, as the festival was called: 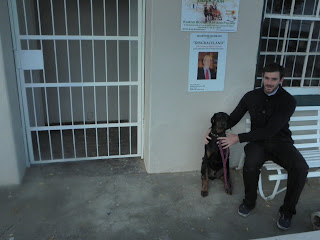 Yes, I know, it looks like the town jail, with J.M. Coetzee as the Wanted man. The venue was in fact a bit more benign than this looks. Here's another shot: 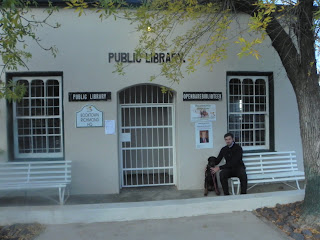 And this was where we spent Saturday, listening to papers on Coetzee. I can't claim that Simon was an attentive audience, but I will say that he was very well-behaved, sitting quite still in the front row, only occasionally gnawing at his chew-bone rather audibly. I thought it only appropriate that a Coetzee festival should contain at least one live dog, as an implicit corrective to the Disgraceland perspective. This would have been a better story if Simon had more dramatically manifested  his resistance to that perspective, but I was only too grateful for his docility. I'll do it again, but next time check out the guest house colour scheme in advance.
Posted by Michiel Heyns at 1:24 AM