He came to stay

As I write, and if airlines perform according to schedule, Charlie's owners are arriving at Cape Town International after a holiday of slightly more than five weeks -- during which Charlie has been keeping Simon company and me occupied. I may have mentioned before that Charlie and Simon struck up a friendship in the park -- if  charging up and down trying to up-end each other can be called a friendship (as I suppose it can: after all, some rugby players are friends -- or are they? I don't know enough rugby players). 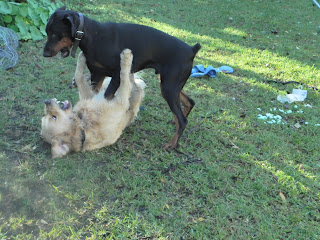 I was not quite sure whether a meeting in the park  constituted grounds for cohabitation, but on balance thought that canine incompatibility manifested itself more promptly and unmistakably than the human equivalent -- in short, if dogs are  going to have a dogfight, they have it when they meet rather than after a year of marriage. So Charlie came to stay.
The stay has been, I suppose, harmonious -- and if I hesitate over that word, it's not because there was discord, but because harmonious may suggest something easier on the ear than Charlie and Simon's accord. In short, it's been noisy, muddy, bumptious and generally untranquil -- but hey, tranquility is for pensioners, not young dogs. Besides, they did have their tranquil moments. 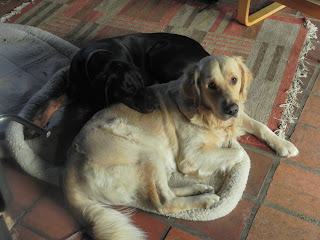 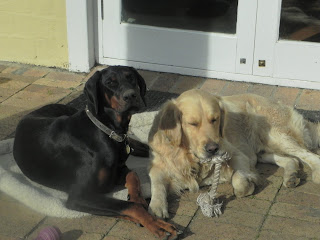 In short, the visit has been a success -- unlike the one I stole the title of this posting from, the one Simone de Beauvoir drew on for her revenge novel called She Came to Stay. I must confess that I haven't read the book -- I have an aversion to de Beauvoir and Sartre both, on account of their shabby treatment of Camus, who has been my intellectual hero ever since he was everybody's intellectual hero (except Simone and Jean-Paul's, of course).
This is the Googlebooks synopsis:


Set in Paris on the eve of World War II and sizzling with love, anger, and revenge, She Came to Stay explores the changes wrought in the soul of a woman and a city soon to fall. Although Françoise considers her relationship with Pierre an open one, she falls prey to jealousy when the gamine Xavière catches his attention. The moody young woman from the countryside pries her way between Françoise and Pierre, playing up to each one and deviously pulling them apart, until the only way out of the triangle is destruction. "Behind the sympathy there is curiosity. . . . A writer whose tears for her characters freeze as they drop." -- Sunday London Times

What the synopsis does not tell us is that the novel is based on the real life menage a trois that de Beauvoir and Sartre attempted with a real-life gamine -- or really a menage a quatre, since Xaviere seems to be a composite of the sisters Olga and Wanda Kosakiewicz. Be that as it may, She Came to Stay was de Beauvoir's act of revenge, and in it she deals with Xaviere as no doubt she wished she could deal with Olga.. So much for The Consolations of Philosophy.
This is a far cry from Charlie and Simon, who have no philosophy and no notion of revenge. As Raymond Gaita says in The Philosopher's Dog, 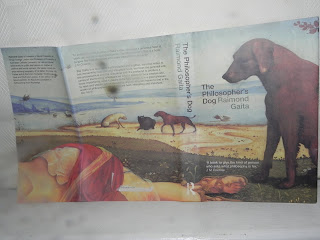 about his dog Gypsy, 'I am ...certain that when she lies on her mat or sits at the front door gazing out to sea, she is not thinking of her sins or the problems of philosophy.'
The one thing that the philosopher can be sure of, in other words, is that his dog is not a philosopher. But philosophy being philosophy, not all philosophers share this certainty.: 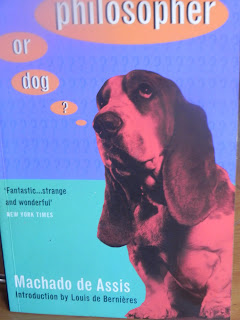 
...seeing that the dog's death is recounted in a special chapter, you will probably ask me whether it is he or his late namesake who gives this book its title, and why one rather than another -- a question pregnant with questions that would take us far.

A question pregnant with questions ... there is, of course, the famous Chinese philosopher who dreamt he was a butterfly, and was never certain ever after that he was not a butterfly dreaming he was a philosopher. Perhaps Gypsy is a philosopher with a dog called Raymond?
But for everyday purposes, I am tolerably sure that Simon is not a philosopher (though I wouldn't vouch for Charlie: that dark-brown gaze of his is either profoundly meditative or extremely dim). One thing I am sure of, and that will have to be the moral of this blog: If you're going to have a menage a trois, do it with a couple of dogs rather than a couple of philosophers.   Ask Xaviere.
Posted by Michiel Heyns at 1:22 AM