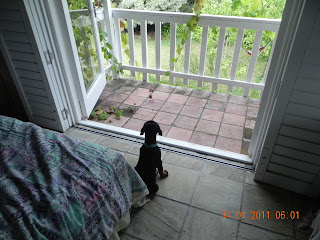 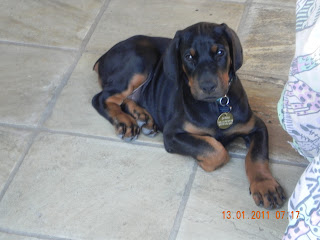 Puppies, like babies and sunsets, are of course notorious sentimentality traps. In the park yesterday, a grown man tickled Simon's belly and said 'Ag shame, mamma.' Nor did I find it an inappropriate response. We do get things a bit out of perspective when dealing with young animals. Or all animals.
Or some of us do. Here is an extract from Zukiswa Wanner 's novel, Men of the South. Her narrator is reflecting on 'the NGO world' -- basically ' a world that loves Africa but does not seem or seek to understand her'. One of the points on which the NGO world (that is, its white component) and Africa do not see eye to eye, is dogs.


When the dog of one of my expatriate colleagues died, group e-mails expressing condolences were sent from as far afield as the US, the bereaved was given days off from the office until she felt better, and a fellow animal lover in one of the offices started a collection for a card and flowers for the bereaved.
This resulted in all the Africans in the organisation, regardless of the country, whispering to each  other, 'Now that madness. Me make a contribution for a dog? So many children starving and they want us to make contributions for a dead dog?'

Now this is difficult to argue with, and I suspect I may also have balked at the card and flowers, not to mention the compassionate leave. But this is really only an extreme manifestation of a tendency to value the lives of (some) animals over the lives of (some) people, a tendency that among other things produces blogs about dogs. There are, after all, more pressing issues that I could be addressing than my new puppy. And let's face it, the money that I spend on my dog could probably keep a couple of kids fed and clothed.

I'll have to think about this one.
Posted by Michiel Heyns at 12:11 AM