The world as udder

Yes, that's not a particularly attractive image, and in various ways inappropriate to a puppy. But here's the source, from that stern moralist, George Eliot, and her greatest novel (and one of the greatest novels ever written), Middlemarch:


We are all of us born in moral stupidity, taking the world as an udder to feed our supreme selves.

The implicit image, clearly, is that of a calf, and perhaps only George Eliot would think of a calf as in the first place morally stupid. (Okay, we none of us would cite calves as  exemplars of intellectual brilliance  -- but morally stupid?) The point is, I think, that what's charming in a young animal (and this is giving George the benefit of the doubt), is at best misleading, at worst reprehensible in human beings. Here is George Eliot again on the subject of young animals, this time from Adam Bede. She is describing Hetty, a pretty dairy maid -- or, in Eliot's term, 'that distracting kitten-like maiden':


Hetty's was a spring-tide beauty; it was the beauty of young frisking things, round-limbed , gambolling, circumventing you by a false air of innocence -- the innocence of a young star-browed calf, for example, that being inclined for a promenade out of bounds, leads you a severe steeple-chase over hedge and ditch, and only comes to a stand in the middle of a bog.

So spring-tide beauty leads straight into the the bog. (As Robert Frost more memorably put it in 'Nothing Gold Can Stay':   'Nature's first green is gold,/ Her hardest hue to hold./Her early leaf's a flower;/But only so an hour./Then leaf subsides to leaf./ So Eden sank to grief,/ So dawn goes down to day./Nothing gold can stay.')   The Eliotic view of innocence is severely moralistic: even a calf has a  'false air of innocence' -- and as for Hetty, readers of Adam Bede will know what a terrible fate Eliot is preparing for her --somewhat gloatingly, it is difficult not to feel.
The problem for Eliot is with 'our supreme selves', the tendency to see the world as conveniently created for our private purposes. The converse is to see the world as a place of restrictions and limitations. We've had these two world views in earlier blogs: on the one hand Larkin's lambs born in snow, not knowing that 'earth's immeasurable surprise' (Eliot's 'spring-tide beauty') is about to transfigure their experience; on the other hand the young steers who, exploring the limits of their world, come up against the muscle-shredding electric fence.
Well, an electric fence would have prevented Eliot's calf from straying 'out of bounds' into the bog; and a more rigid code of conduct would have spared poor Hetty the suffering that Eliot metes out to her.  But would we sacrifice 'earth's immeasurable surprise' for the sake of not suffering the  unpleasant surprise of the electric fence and the bog? 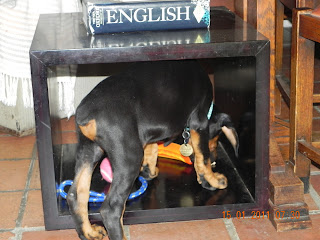 It has been interesting, watching Simon in his first week away from the udder, as it were, to note at what point  his assumption that the world is there for his free exploration has come up against the knowledge (if knowledge it can be called) that the world is also resistant matter, setting limits to his supreme self. The answer is that the knowledge comes almost immediately: by definition exploration will continue until it is checked. And it has been instructive witnessing Simon's outrage at the discovery, the righteous anger at a universe that does not arrange itself just as he might have preferred it. And before we know it, the will manifests itself, asserting itself against an intransigent reality.  Nothing gold can stay. 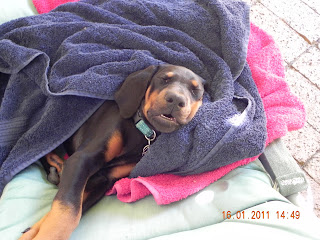