I'm not sure how it came about that death has become a recurring theme in this blog; perhaps, after a certain age, the sight of very young creatures makes one inevitably think of their necessary decline. Thus, in an earlier blog I quoted Robert Frost's 'Nothing Gold Can Stay', in which the celebratory first line, 'Nature's first green is gold', immediately modulates into the downer of the second line: 'Her hardest hue to hold' -- and so on, to the poem's world-weary conclusion: 'Nothing gold can stay.'
I'm bringing in the big guns here to justify the fact that instead of indulging in pictures and descriptions of romping puppies, I'm obsessing about death. Be that as it may, here is a poem about death and dogs, and it's such a wonderful poem that I really think I needn't apologise for including it here. It's by Richard Wilbur:

My dog lay dead five days without a grave
In the thick of summer, hid in a clump of pine
And a jungle of grass and honeysuckle-vine.
I who had loved him while he kept alive

Went only close enough to where he was
To sniff the heavy honeysuckle-smell
Twined with another odor heavier still
And hear the flies' intolerable buzz.

Well, I was ten and very much afraid.
In my kind world the dead were out of range
And I could not forgive the sad or strange
In beast or man. My father took the spade

And buried him. Last night I saw the grass
Slowly divide (it was the same scene
But now it glowed a fierce and mortal green)
And saw the dog emerging. I confess

I felt afraid again, but still he came
In the carnal sun, clothed in a hymn of flies,
And death was breeding in his lively eyes.
I started to cry and call his name,

Asking forgiveness of his tongueless head.
. . . I dreamt the past was never past redeeming:
But whether this was false or honest dreaming
I beg death's pardon now. And mourn the dead.

After that, I should perhaps after all have some gambolling puppies. Death has had its due; here's to life: 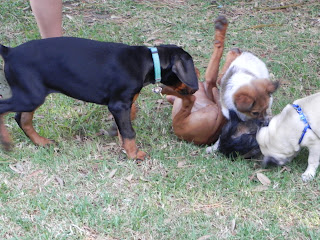 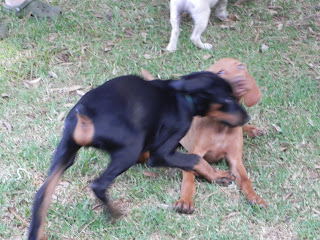 Yes, I know it looks like a feeding frenzy, but in fact it's Puppy Class in full cry. Those are Life Skills that they're acquiring.
I
Posted by Michiel Heyns at 12:04 AM