The dogs of Istanbul: 'these mad, lost creatures'? 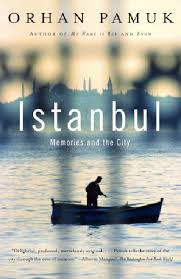 In his melancholy (you'll be hearing that word a lot in this posting) memoir, Istanbul: Memories and the City (2005), Orhan Pamuk turns his melancholy gaze upon that perennial problem, the city's stray dogs:

They all look alike, their coats all the same colour for which no one has a name-- a colour somewhere between grey and charcoal, that is no colour at all. They are the bane of the city council: when the army stages a coup, it is only a matter of time before a general mentions the dog menace; the state and the school system have launched campaign after campaign to drive dogs from the streets, but still they roam free. Fearsome as they are, united as they have been in their defiance of the state, I can't help pitying these mad, lost creatures still clinging to their old turf.

Pamuk, then, sees dogs as an emanation of that quintessential Istanbul mode,  huzun, (the word needs two umlauts, but my blogger doesn't seem to supply them),


which denotes a melancholy that is communal rather than private. Offering no clarity; veiling reality instead, huzun brings us comfort, softening the view like the condensation on a window when a tea kettle has been spouting steam on a winter's day.  .. Now we begin to understand huzun as, not the melancholy of a solitary person, but the black mood shared by millions of people together. What I am trying to explain is the huzun of an entire city, of Istanbul.

Admittedly the dogs, as described here, hardly seem to be a source of comfort.   But, like the black mood called huzun, the dogs are 'shared by millions of people together.' And the fact that they have survived any number of attempts to eradicate them, may suggest that they are at any rate not universally detested. Even Pamuk, as we have seen, expresses pity for them -- and surely there is some admiration, too, in seeing them as 'united ... in their defiance of the state'? And in 'still they roam free'?

I spent just over a week in Istanbul last September, and I can by no means claim to have come to know a city  as huge, complex and unknowable as Istanbul in that time. But from a necessarily superficial tourist perspective: well, yes, one cannot but notice the dogs. They are everywhere. 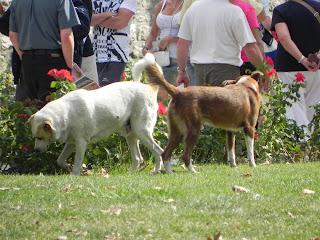 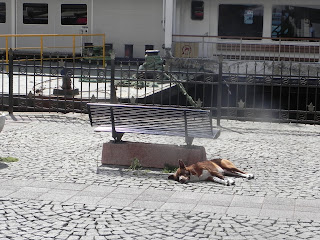 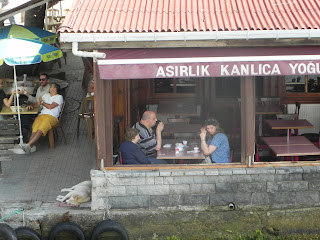 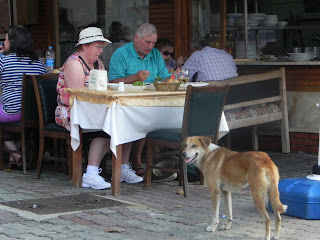 But do they seem like 'mad, lost creatures'? Not to the tourist eye; but then, these are dogs that have adapted to the tourist spots, where the pickings are probably richer than in the backstreets of Istanbul. (That lady in the white sneakers will surely slip that dog a crust of bread?) As a friend of mine commented, the stray dogs of Istanbul seem in pretty good nick. In fact, many of the stray dogs have plastic tags attached to their ears; it was explained to me that this meant that they'd been captured, neutered and vaccinated, and returned to the streets. More humane and probably more realistic than trying to eradicate them.

Istanbul, of course, is a Muslim city, and by and large Muslims are, for religious reasons, not dog-friendly. It's not the least surprising aspect of this unpredictable city that its inhabitants seem nevertheless to have developed a live-and-let-live relationship with 'their' dogs. This was brought home to me with particular vividness one hot afternoon in one of Istanbul's most frantic thoroughfares, on the main tram route. A young dog was moseying about in the street, more or less minding its own business. A passing truck stopped, I think for a traffic light, and the driver tried to attract the dog's attention,  heaven knows why: perhaps the driver was just bored, or he wanted to take the dog home for his kids. The dog was not particularly interested. (The dogs of Istanbul seem to tolerate humans with about the same benign indifference as humans extend to them.) The driver produced a plastic carrier bag to attract the dog's attention, and then, as the traffic started to move, dropped the bag and drove off. The young dog was now interested in the bag, and started playing with it in the middle of the road, right on a tram track . 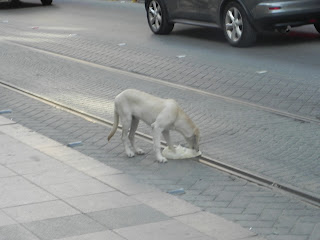 I was aghast, expecting a tram to come hurtling around the corner at any moment. I tried to call the dog, but how do you call a Turkish dog? This one seemed oblivious to my efforts.   I was  somewhat heartened to find that my concern was shared by any number of passers-by, notably a group of kids, who did all they could to get the dog off the tracks: 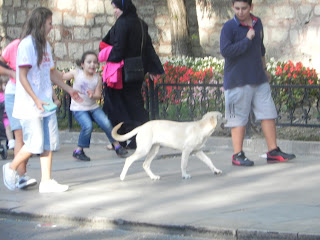 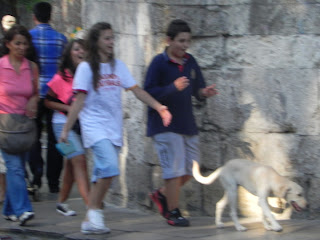 But Istanbul dogs are independent creatures, and this one soon left his saviours behind and returned to the street: 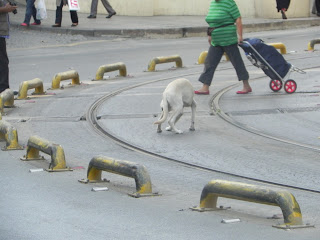 In case you were wondering, the dog sensibly got off the tracks after this and disappeared down a side street.

When I told an Istanbullu  this story, she said, 'Oh, you needn't have worried. The tram would have stopped for the dog.' (I must add that the same person said to me, 'We don't read Pamuk in Istanbul. He's too depressing.')

Perhaps huzun, which after all sounds like a muscular kind of sentimentality, makes allowances for trams and stray dogs alike.  In a way, this seems more natural than the dog-loving capitals of the world, where dogs are coddled and cossetted but not allowed anywhere off lead . More on this topic soon.

Posted by Michiel Heyns at 5:26 AM